8/3/2022 -
When the Tischendorf family moved to 410 Sprint Car racing in 2022, they were expecting this season to be simply a learning year to prepare and gain k

8/3/2022 -
Kyle Schuett and his family made the decision to put aside a very successful Midget career back in 2019 in favor of a Winged 410 Sprint Car. The team 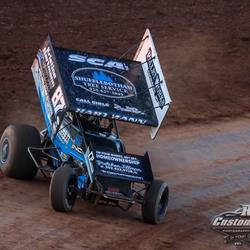 8/3/2022
(PEDAL DOWN PROMOTIONS) August 3, 2022 – The gradual building process continued to take shape for 410 Winged Sprint Car rookie Austin Hartmann and the 87A Hartmann Racing team with a pair of steady performances in Bumper to Bumper Interstate Racing Association 410 Sprint...more 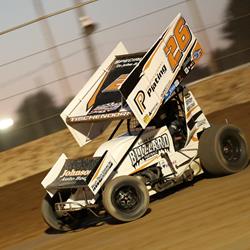 8/3/2022
When the Tischendorf family moved to 410 Sprint Car racing in 2022, they were expecting this season to be simply a learning year to prepare and gain knowledge for 2023. While that has been and still is the case, they have found consistent speed with rookie driver Tyler...more 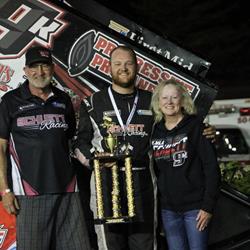 8/3/2022
Kyle Schuett and his family made the decision to put aside a very successful Midget career back in 2019 in favor of a Winged 410 Sprint Car. The team found early success with the MOWA Sprints in the southern Midwest, and then made another switch to the Interstate Racing...more
View News 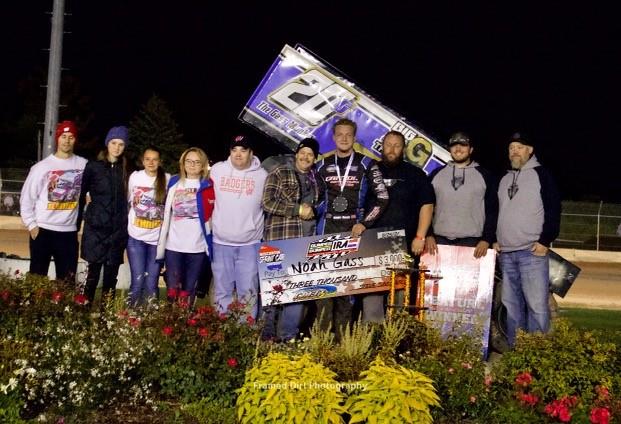 After a Dodge Country fair grounds rain out on Friday night, all three series under the Interstate Racing Association banner, the Bumper to Bumper winged 410s, the Auto Meter Wisconsin wingLESS series and then IRA Lightning Sprints all defended upon the Plymouth Dirt Track for the 4th Annual Wisconsin Sprint Car Championships.

Mark Heinert took the early lead in the A main, maintaining his grasp on the top spot of the podium until just past the halfway point of the feature. Lap 12 saw 5th starting Mike Neau move past the 55H of Heinert and into the lead. Neau would lead the remaining 8 laps en route to the feature victory. A third place run for Nick Petska solidified him as the 2021 champion.

In the wingLESS division, as has become the normal for championship night, the top 10 in points were locked into the feature and the rest of the field was broken into 2 qualifying races taking the top 5 in each, and then a B main taking the top 4 to set the 24 car starting field. Nathan Crane and Natalie Klemko won their qualifiers while Mike Sullivan won the B main.

The feature saw two stories play out as Tim Cox and former series champion found himself out front and working to stay there while behind him Ryan Zielski and Ryan Marshall who started side by side in row 3 were separated by only 14 points heading into the feature. The pair battled each other as well as Jimmy Sivia and Chris Klemko. Ryan Zielski knew he needed to win if he wanted to claim the championship, but all Ryan Marshall needed was to finish inside the top 5. It seemed a top 5 finish wasn’t good enough though for the Kansasville kid as he waged war with Sivia and Zielski for 2nd through 4th. When the checkered flag flew Tim Cox was victorious on the night, but it was Ryan Marshall who claimed the championship with a 3rd place finish.

As the A main rolled onto the track, Jake Blackhurst had clinched his 2nd IRA Championship, this time aboard the Rhine Auto machine, but that didn’t mean fans wouldn’t be treated to a spectacular show. Noah Gass who claimed his first IRA victory just a few weeks ago at the Plymouth Dirt Track jumped out to the early lead over Blackhurst and Schlafer who had quickly charged from 5th to 3rd in the opening lap. Blackhurst and Schlafer trailed Gass until he entered lapped traffic and then they closed the gap but could not find a way around the Mounds Oklahoma native. A caution as halfway would take Gass out of lapped traffic momentarily but also allow Schlafer to move past Blackhurst and into 2nd. Now with Schlafer leading the charge against Gass the story seemed to be the same, Gass was too strong in lapped traffic to find a way past. A caution with just a few laps remaining would change everything though. Schlafer was able to keep with Noah Gass on the restart and when Gass bobbled off of two Danny Schlafer took advantage, darting past the 20g and taking the lead as the white flag flew. Gass would cross under Schlafer down the front stretch and the pair would run side by side through turns 1 and 2. Exiting turn 2 they nearly made contact and raced down the back stretch. This time Gass would take the high side and Schlafer would enter on the bottom. As they raced back to the line, Gass would be victorious with a last lap pass, awarding him a bonus courtesy of Kool Trikes and Danny Schlafer would settle for 2nd place. 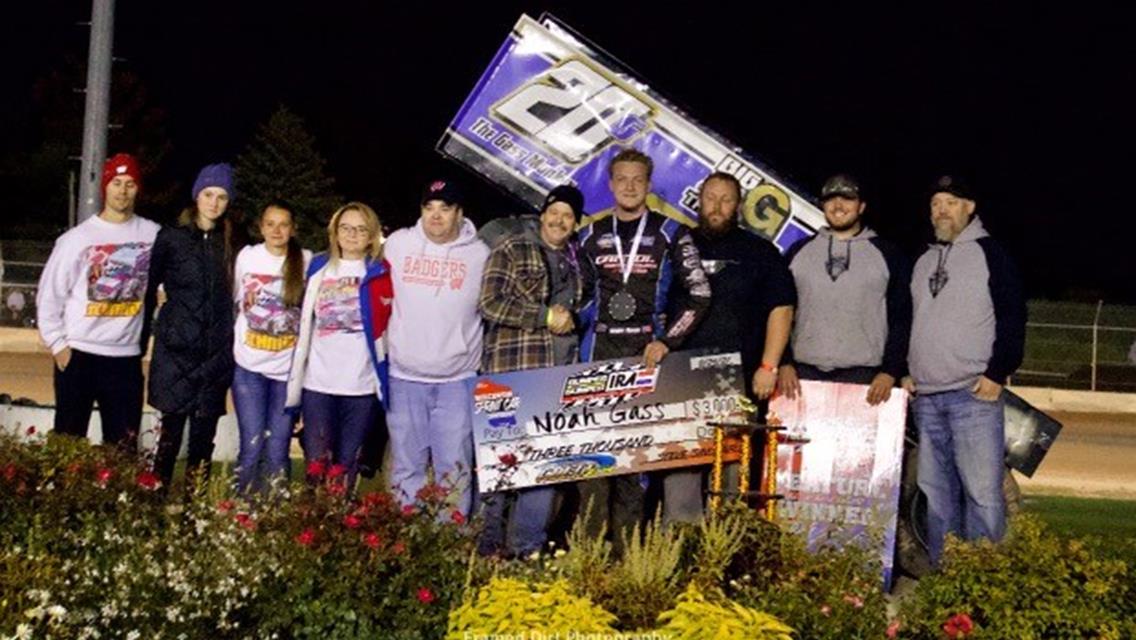 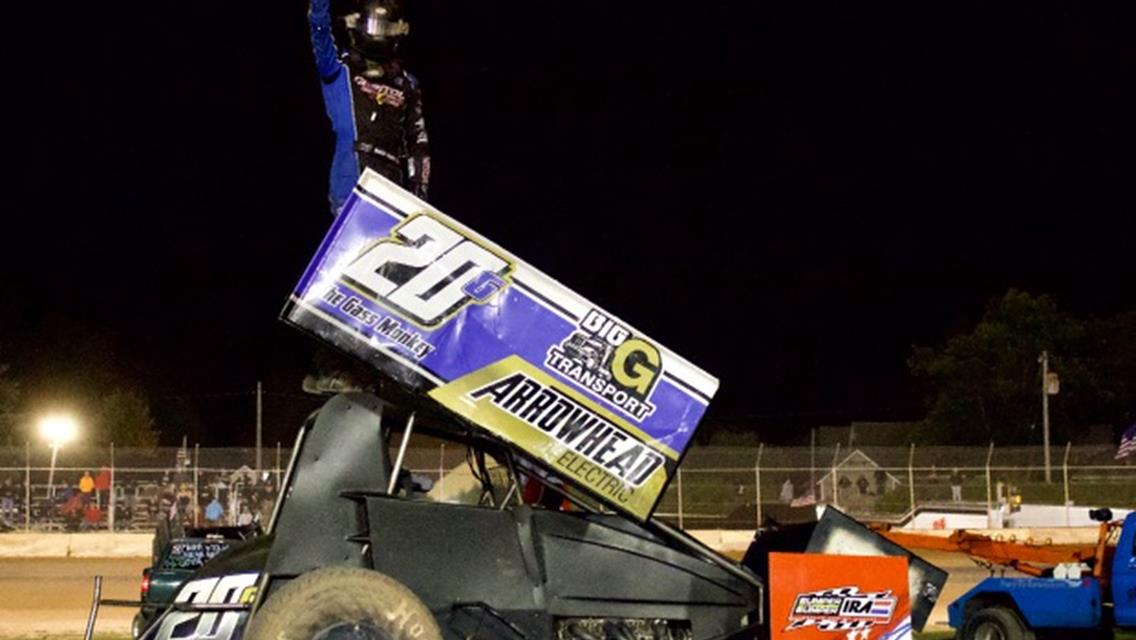 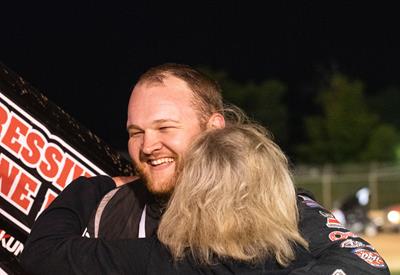